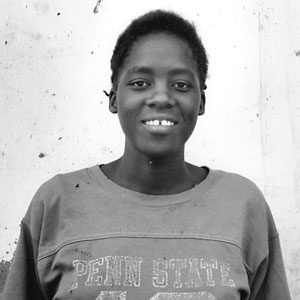 My father passed away in 1990 – but it is normal that death is here. We are only ten people – six sisters and four brothers. I am staying with my mother. But nowadays I know that she is my real mother because my father married another woman and my mother went in 1986. She left me behind. In 1996, my mother died and my real mother came back. First I thought that she was my elder sister, because she left me when I was only two and now she came back when I was twelve. I joined MYSA in June 1997. I didn’t know how to play but was interested in football. My effort lead me to Shootback. Photographing is not quite as easy work that people might think, but when you know what you are doing and what you want in life, things cannot be all that difficult.

Shootback empowers young people to tell their own stories and express their creative voices through photography, writing, and critical thinking about the world around them.

Stay informed with news, video, and photo updates and announcements about events, campaigns, and other opportunities to participate.